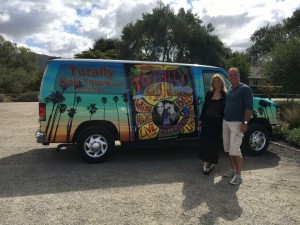 What’s so cool about being on a wine tour is that each one has a heart of it’s own, which evolves over the course of the day. The guests and the guide take in the terroir of the day:  the salt of the ocean breeze as it tangles along the Santa Barbara coast, the soft, felted fog layer pushing up against Sta. Rita Hills, the morning air that feels as crisp as an apple. Add in the golden light of a season in a sip of wine before noon, crunch of simple crackers between tastes of honeydew and pepper, and intermittent laughter. The day will probably gift you with a new favorite wine, appreciation for the simplicities of a day in the country with limited cell service, or a bottle of garlic olive oil fresh off the farm. At the end of the day, the tour it has it’s own distinct personality just like the people on the Totally Cali Tours van- sometimes wild, sometimes mellow, but never lacking heart.